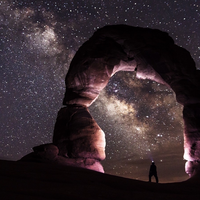 1 John 3:1
The Creator of the universe
wants to be your Father

1 John 3:1 Behold what manner of love the Father has bestowed on us, that we should be called children of God! Therefore the world does not know us, because it did not know Him.

This verse is found in the first letter from the apostle John, which was written so that our joy might be complete (1 John 1:4) and that we might know that we have eternal live (1 John 5:13).

Our verse today starts with the imperative Behold, which is in Greek ‘horao’. It means to see. So we are told to look at something. What should we look at? The manner or type of the love God the Father has bestowed on us. The Greek for bestow is ‘didomi’ and it means to offer, to give. So we have to look at the type of love that God gave us.

What does John say about it? It has a purpose, because the ‘that we should’ phrase has a ‘hina’ and a subjunctive. The purpose of God’s love is so that we should be called children of God. This means being called a child of God is not automatic. Not everyone gets the title ‘child of God’, but only those who received God’s gift. If someone wants to give you a gift, you don’t have it until you actually received it. That’s also how it works with God’s gifts; we have to receive them (and saying ‘thank you’ would be nice) in order to get it.

What happens next? John sais that when we accept God’s love, and have become children of Him, then the world will not know us, because it also does not know Him. What is the world? The Greek word used here is ‘kosmos’, which literally means ‘something ordered’, so it represents God’s creation, the universe or the world, and all that is in it. And the word for know is ‘ginosko’, which means to come to know, to learn, to recognize.  So God’s creation does not recognize us as God’s children. Why? John sais because it does not recognize God.

But we know Him and we know His love for us. Have a look at that! God, the almighty Creator of everything, who created billions of galaxies with each one having billions of stars, who created billions of human beings and designed life, this incredible impressive and powerful being, wants to have a father-child relationship with us. Being a young father myself, knowing the deep love I feel for my son, makes this all the more impressive. Truly a reason to shout out: “Look at that!”

Just stop and think for a while about this amazing love God has for us, and be thankful that you know Him and that He gave His love to you so that you should be called a child of God. It doesn’t matter that the people who don’t know God don’t understand you. They don't understand you because they don’t know your Father. But by all means, do tell them about your Father because He wants them to become His children too.