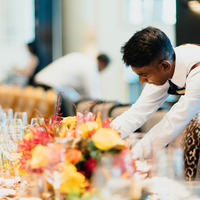 1 Timothy 3:12 Let deacons be the husbands of one wife, ruling their children and their own houses well.

This verse is part of the instructions Paul gave to Timothy, about how the church in Ephesus should be run. The third chapter deals specifically with two groups of people within the church: overseers (episkopos in Greek) and deacons (diakonos). The overseers (supervisors, rulers) are those tasked with the responsibility to shepherd the flock (see Acts 20:28), protecting them from attacks from both within and without (Acts 20:29, 30). The deacons are servants, who serve the body of Christ in various ways. A good example of the distinction between them can be found in Acts 6, where the twelve apostles appointed seven people to serve (diakoneo) the physical needs of the believers (waiting on tables) so that they themselves could focus on prayer and teaching the Word.

Paul, in his instruction to Timothy, gives a long list of qualifications for both groups. A detailed exposition on these can be found on truthbase.net. We are focusing on two of them today in our verse above. So let’s dive into the Greek and see where that leads us.

The subject of the verse are the deacons, the diakonos. There is actually some debate about the origin of this word, but from how it is used in the NT, we can clearly see that it refers to servants, people who serve. The verb form is used for Martha being busy serving, and in Acts 6:2 it is used for ‘serving’ tables .

The first requirement of the servants in the church is that they must be ‘husbands of one wife’. This phrase in the Greek is ‘mias (one) gynaikos (woman) andres (man)’. Does this mean that servants must be male? In Romans 16:1, Paul writes “I commend to you Phoebe our sister, who is a servant of the church in Cenchrea” and he uses the same word, diakonos. So there were female servants in the church. It is more likely that he is making the point that role models within the church should follow the original design of God for marriage, so one man and one woman (Genesis 3). Divorce and polygamy were prevalent in the days when Paul wrote this (ie “you have had five husbands, and the one whom you now have is not your husband”, John 4:18), which is why some translations use ‘faithful to his wife’ (NIV, NLT).

The second requirement is that servants must rule (‘proistemi’, from ‘pro’, before, and ‘histemi’, to stand) their children (‘teknon’, children) and households (‘oikos’, a house or a family) well. The ruling, ‘stand before’, implies caring for, leadership by example, with a good reputation and protecting those who are under their care. This same word is used of Phoebe in Romans 16:2, who apparently provided this kind of care to many people, including Paul himself!

Both requirements demonstrate the need for servants to be of a good reputation, both inside and outside of the church, and they must have family lives that are an example to others. Perfection is not the standard, but a respectable and exemplary life is.

Now what happens if there is trouble in the family? What if some adult family members under their care are not playing along nicely and are causing strife and shame? In that case, as Paul instructed Timothy, (1 Tim 3:10), the deacons should be tested by the church to see if there is anything they have done to cause the situation. If something can be brough up against them, they should not be deacons, but if there is nothing, then they can serve as deacons.

Deacons that serve well deserve respect and they can look forward to the words “Well done, good and faithful servant” when they stand before the judgement seat of Christ.