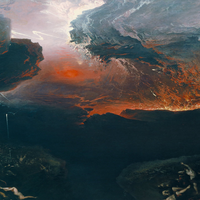 2 Peter 3:14 Therefore, beloved, looking forward to these things, be diligent to be found by Him in peace, without spot and blameless;

Peter writes this in his second epistle, which he wrote to wake up his sleepy audience’s pure minds (3:1). In this epistle, he used quite a bit of ink talking about the world’s upcoming destruction. He writes:

2 Peter 3:10 But the day of the Lord will come as a thief in the night, in which the heavens will pass away with a great noise, and the elements will melt with fervent heat; both the earth and the works that are in it will be burned up. 11 Therefore, since all these things will be dissolved, what manner of persons ought you to be in holy conduct and godliness, 12 looking for and hastening (or earnestly desiring, ASV) the coming of the day of God, because of which the heavens will be dissolved, being on fire, and the elements will melt with fervent heat? 13 Nevertheless we, according to His promise, look for new heavens and a new earth in which righteousness dwells.

These events, the burning up of the earth and dissolvent of the heavens, followed by the coming of the new heavens and a new earth, are things that Christians are looking forward to. The word for looking forward is ‘prosdokao’, which comes from ‘pros’ (to, towards) and ‘dokeuo’ (to watch). So it literally means to look forward to. The verb is a participle and not an imperative, so it is not something that Christians are commanded to do, but something they are doing. They simply expect these things to happen, since God has promised them.

Some people think that Jesus is taking a very long time (these words were penned down some 2000 years ago) but Peter had just reminded his audience that a thousand years is only like a day to God (2 Peter 3:8). In this context, Hosea has some interesting things to say:

Hosea 6:2 After two days He will revive us; On the third day He will raise us up, That we may live in His sight.

According to Revelation 20, at the end of the millennial kingdom, the heaven and earth will flee away. It is at this time that all the dead are raised and appear before God who will judge everyone. This judgment has two parts, based on what is written about us in the Book of Life, and in the books of works (Revelation 20:12). If your name is not found in the Book of Life, you will be tossed in the lake of fire. If you are written in the Book of Life, you will still be judged, but then according to your works, as they are penned down in the books (plural) of works. The more good works, the better your reward (Rev 22:12) in the new earth.

After this judgement, the new heaven and new earth are introduced, see Revelation 21. This is more than a little interesting. We humans are destined to live for an eternity. It’s our choice whether we want to spend that eternity with God on the new earth, or without God in the lake of fire. But even if we chose with God (which is obviously the far smarter choice), the quality of that eternal life depends on the works we have done in this short temporal life.

This is why it is so important to use your life well. And it is with all this in mind that Peter tells his sleepy audience to be diligent (the imperative) to be found by the Lord in peace, without spot and blameless. The Greek word for being diligent is ‘spoudazo’ and means to make haste, or to exert yourself. Being diligent is a good translation. Christians should be diligent in what? In being found in peace, being without spot and being blameless.

How can we be in peace? We live in a world that is ruled by Satan, he is called the ruler of this world, John 14:30. So we live currently in enemy occupied territory, which cannot be peaceful. But we can have peace with God (Romans 5:1) and with our fellow believers (Mark 9:50), if we live our lives according to God’s instructions, see Philippians 4:9.

It is through keeping Gods commandments that we will be found without spot and blameless, as Paul describes in his first letter to Timothy.

1 Tim 6: 13 I urge you in the sight of God who gives life to all things, and before Christ Jesus who witnessed the good confession before Pontius Pilate, 14 that you keep this commandment without spot, blameless until our Lord Jesus Christ’s appearing.

So, since we are expecting the end of this world and subsequent two-fold judgment by God, we should be very diligent to live in peace with God and fellow believers, through the keeping of God’s commands. If we do that, we will be found spotless and blameless in His sight, and we will hear the words: “Well done, good and faithful steward”.