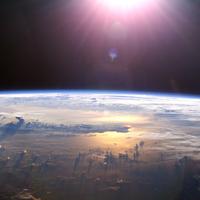 Psalm 1:1-6 The Blessings of the Righteous

1."Blessed is the man who does not walk in the counsel of the wicked, nor stand on the path of sinners, nor sit in the seat of scoffers;2.but his delight is in law of the Lord and on His law he meditates day and night.3.He will be like a tree planted by the streams of water, that brings forth its fruit in its season/proper time, whose leaf also does not wither. Whatever he does shall prosper."4.The wicked are not so, but are like the chaff which the wind drives away.5.Therefore the wicked shall not stand in the judgment, nor sinners in the congregation of the righteous.6.For Yahweh knows the way of the righteous, but the way of the wicked shall perish."

The person God blesses is the one who doesn't do what the bad guys do (become increasingly entrenched in the “wisdom” and ways of the wicked until one winds up scoffing at truth), but does what God wants him/her to do (meditate on His revealed will so they can do it). This is the person who is blessed, protected and prospered by God.

The wicked (the one who knows the law and doesn't do it - Psalm 50) is not protected and fruitful, sharing life with others, but is like the useless outer husk of wheat that can't beget life to anyone, and inherits the wind. Therefore (as a result of refusal to respond in submissive obedience to God's word) the wicked will be cast down in the day of judgment, and will not rejoice with the righteous over God's deliverance of them. The Lord knows/protects (Nahum 1:7) the paths of the righteous but the path of the wicked leads to pain and perishing.

As you encounter God's word, think through implications for applications (=meditation) because God blesses those who do, but leaves the fools to their folly until judgment day.

Lord, may the roots of my thinking and values go deep into Your word, so I may bear its fruit continually and experience the blessings You so graciously give to those who please You. Amen.

Proverbs 1:1-7 How Many Of These Benefits Do You Own?

1.“The proverbs of Solomon, the son of David, king of Israel:2.to know wisdom and instruction/correction; to discern the words of understanding;3.to receive instruction in wise dealing: in righteousness, justice, and equity;4.to give prudence to the simple, knowledge and discretion to the young man:5.that the wise man may hear, and increase in learning; that the man of understanding may attain to sound counsel:6.to understand a proverb, and parables, the words and riddles of the wise.7.”The fear of Yahweh is the beginning of knowledge; but the foolish despise wisdom and instruction.

Lots of people read some verses from Proverbs every day. A good idea. I wonder how many actually achieve the benefits listed above? Maybe verse 7 is the key to application.

Wisdom is choosing the right objectives and the right means of attaining them. You need both. If you don't care what God thinks, to the extent that it controls your actions (Proverbs 14:27), you are foolish.

Proverbs was not just given to increase our knowledge, but to change our values and lives. Every week we should be able to point to instances of how Proverbs pointed us to the wise path.

All Wise God, I praise You for providing what I need to keep my toes pointed on the wise path. Please correct my missteps by the instruction and correction of Your Word. Amen.

7."YAHWEH God formed man from the dust of the ground, and breathed into his nostrils the breath of life; and man became a living soul.15.YAHWEH God took the man, and put him into the garden of Eden to work it and to keep it.
16.YAHWEH God commanded the man, saying, "Of every tree of the garden you may freely eat; 17.but of the tree of the knowledge of good and evil, you shall not eat of it; for in the day that you eat of it you will surely die."
18.YAHWEH God said, "It is not good that the man should be alone; I will make him a helper suitable for him."21.YAHWEH God caused a deep sleep to fall on the man, and he slept; and He took one of his ribs, and closed up the flesh in its place.22.He made the rib, which YAHWEH God had taken from the man, into a woman, and brought her to the man.23.The man said, "This is now bone of my bones, and flesh of my flesh. She will be called 'woman,' because she was taken out of Man."24.Therefore a man will leave his father and his mother, and will join with his wife, and they will be one flesh.
25.They were both naked, the man and his wife, and were not ashamed."

Genesis chapter 1 was the general account of creation, now chapter 2 zooms in to the specifics of humankind.

Man was created to work (literally, “serve” – the essence of work) and had a job before the Fall (after he sinned it became more difficult).

"Every tree," "freely eat," "surely die." You'll need to note these for chapter 3. Minimizing God's blessings opens the door for discontent and eventual sin.
God exercises His sovereignty by setting the rules, not micromanaging every decision and action.

God always does what's good. God's rules, work and marriage are instituted by God for our good. Cf. Deuteronomy 10:13. Have a little faith that He knows what He's doing. If He said it, it will happen (cf. Genesis 1).

Jesus views this as the definitive statement on marriage (Matthew 19:4-6). “Leave" is a social/legal declaration of intent, leaving behind our old singular identity to form a new entity; “Cleave” is an emotional/spiritual bonding used of gluing two pieces of paper together, which rip each other apart if separated; “One flesh” is a physical/spiritual union of intimacy. Marriages should reflect the unity of God. Failure to fulfill the three responsibilities diminishes union and joy.

Did Adam trust and believe God? Do you?

Do you view God's commands as helps or hindrances to your happiness?

Heavenly Father, help me recognize and embrace Your goodness and wisdom in the circumstances of my life. I trust that You are infinitely good, and know best. Amen.

God in a nutshell: Sovereign ruler, concerned about what's good for us, who blesses and sets the rules, specifying consequences, which we are free to reap. Doesn't micromanage every decision, just like a sovereign king or nation establishes the rules and doesn't micromanage the decisions of the citizens.

Us in a nutshell: Dependent creatures, designed for intimacy, infused with God's breath. We're given commands with the expectation we would obey them. We have choice, but don't always choose wisely.

At what point does life begin? What differentiates us from pond scum? Which came first man or animals? Why the fashion blurb about their clothing (or lack thereof)?

A common literary technique is to move from the general overview to the specific details. These are not two different and contradictory accounts of creation as some people educated beyond their intelligence erroneously think. I attended a faculty orientation at a university where I teach and heard a philosophy professor relate how she would tell her students how the two different accounts showed the Bible was false. It's amazing that none of the greats of the Scientific Revolution, who were all Theologians, noticed what she was so clever to observe. Too bad she never had an English or History course. She might have learned something. The author is picking out pieces of the general overview in Genesis chapter 1 to develop specific themes in chapter 2. He is not giving a new chronology. If you were going to create a work of fiction which changes the world, you don't start off with such an obvious "error."

v3 would have great significance for the Exodus audience, since the Sabbath was the sign of the Mosaic covenant.
v6 a vapor canopy was the first lawn sprinkler system.
v7 “formed” is used of an artisan/potter designing a work of art. Add breath, and get life. Remove breath, and lose it. The Holy Breath in the New Testament might be worth thinking about here.
v9 Man's access to the tree of life indicates God's intent that man have life (and as Jesus said, have it abundantly, in John 10:10).
v16 note who gets the command.
v18 God is called our help/helper a number of times, ie, Psalm 33:20.
v19 naming things is a form of exercising dominion
v25 Nakedness is a key concept (you'll eventually know why). Hints: Matthew 17:2; 2 Corinthians 4-5.

Where to go for more

Truthbase.net has Tools to Manage Your Work, and Relationships/Marriage under the TOYL materials.
There is a summary sermon called: Work: I Hate My Boss & My Railroad Train Pajamas but I'd suggest you dig deeper to learn how to do your Work As Worship.
Truthbase.net has several Biblical and secular resources for developing relationships as God intended. Check out the series enhancing Gottman's “Seven Relationship Principles” from a Biblical perspective. All Truth is God's Truth, and we can gain insight in applying Biblical Truth from any source.

IF YOU'RE SINGLE, there are two key principles to practice:
Solomon, a guy who knew a lot about relationships thrice said: "Don't stir up or awaken love until the proper time" (Ecclesiastes 2:1). Paul said, in the context of relationships "don't defraud one another" (1 Thessalonians 4:1-4).
If you want a "Happily Ever After" fairy tale ending, learn what the other half is looking for by visiting the Sleeping Beauty or Prince Charming outlines on Truthbase.net.
Basing your life on the Truth found in Contentment: Lord of the Ringless will free you up to get the most out of your stay here on earth.

Are you sure you want to delete this ?