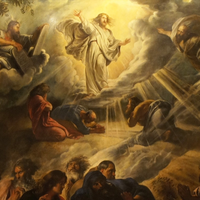 Mark 1:15 and saying, "The time is fulfilled, and the kingdom of God is at hand. Repent, and believe in the gospel."

Our imperative this week is from the gospel of Mark. It is part of the mini summary of Jesus’ life prior to calling His disciples to follow him. Mark only spends 15 verses to describe John the Baptist, the temptation of Jesus in the dessert, and His early ministry. Luke takes 214 verses to come to the same point. As soon as Mark reached the point of the calling of the disciples, he slows down his pace significantly, making clear that his gospel is focused on Jesus teaching his disciples.

Our verse today comes just before this pivotal event in Mark, and, together with verse 14, it summarizes Jesus’ early ministry.

Mark 1:14 Now after John was taken into custody, Jesus came into Galilee, preaching the Good News of God’s Kingdom, 15 and saying, “The time is fulfilled, and God’s Kingdom is at hand! Repent, and believe in the Good News.”

So what is Jesus’ early message? It is basically the same as what John the Baptist preached, “Repent, for the Kingdom of Heaven is at hand!” (Matthew 3:2). So let’s dissect the various parts of our verse today and look at the Greek, to see if we can find some hidden gems.

The first little phrase is ‘The time is fulfilled’, or in Greek ‘kairos pleroo’. Kairos comes from head, and it means ‘things coming to a head’. So it typically refers to a specific time frame or season. Pleroo means to make full, or complete. The verb is in the perfect tense, which emphasizes the present, or ongoing result of a completed action. So it seems that a particular season has ended, and that there are ongoing consequences of this. The season that just ended is the one in which the Jewish people were waiting for their promised Messiah.

The next phrase is ‘the kingdom of God is at hand’. To understand what the kingdom of God is, you have to know Isaiah 40. That chapter contains the following prophesy, about John the Baptist, and it is referenced in all four gospels (Matthew 3:3, Mark 1:3, Luke 3:4, John 1:23).

Isaiah 40: 3 The voice of one who calls out, “Prepare the way of Yahweh in the wilderness! Make a level highway in the desert for our God.”

A kingdom has a king who rules, and subjects who are subject to the king. We read the following in Isaiah 40 about this kingdom:

Isaiah 40:9 You who tell good news to Zion, go up on a high mountain.
You who tell good news to Jerusalem, lift up your voice with strength.
Lift it up. Don’t be afraid.
Say to the cities of Judah, “Behold, your God!”
10 Behold, the Lord Yahweh will come as a mighty one,
and his arm will rule for him.
Behold, his reward is with him,
and his recompense before him.
11 He will feed his flock like a shepherd.
He will gather the lambs in his arm,
and carry them in his bosom.
He will gently lead those who have their young.

The Lord God will come and reign, rule, reward, and regather. Jesus said that this Kingdom was ‘at hand’, ‘eggizo’, which comes from the word that means near or close. When we compare the description of the kingdom in Isaiah 40 with history, we know that this kingdom has not come as yet. Satan at this moment is still the ‘ruler of this world’ and God is not ruling just yet. But with the arrival of Jesus, it did come much closer and  thus there is urgency in his message. The last 2 phrases deal with this urgency and contain our imperatives.

Jesus calls us to repent, and to believe the good news. The Greek for repent is ‘metanoeo’, which comes from meta ‘changed after being with’ and noieo ‘to think’. So it literally means to think differently afterwards, or to change your thinking. Jesus calls people to change their mind about something. He also tells them to believe the good news (about the kingdom, verse 14). The Greek for believe is ‘pisteuo’ and means to be persuaded about something, or trust or have confidence into something.

So how does this all hang together? Isaiah mentions the good news of the coming Lord who will reign and reward. Jesus tells people to change their mind and trust that this is indeed going to happen. So, do you believe that the Kingdom of God is coming in which He will reward His faithful servants?

I will never forget the words of a dear friend of mine, after I was able to show him that there is such a thing as rewards in God’s kingdom (using amongst others Matthew 16:25-27 and Revelation 22:12). He exclaimed “That changes everything!”. And indeed, it does. We should change our thinking and our lives in anticipation of the reward of God in His Kingdom. Because the King is coming. Godspeed!