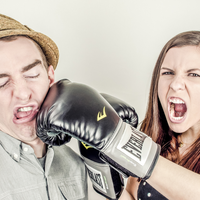 Romans 12:14
Bless those
who hurt you

Romans 12:14 Bless those who persecute you; bless and do not curse.

This short verse from the letter of Paul to the Romans has three imperatives. Two times it tells the Romans to bless certain people, and once to not curse them. That is pretty strong language, so let's have a look at the Greek to make sure fully understand what Paul is writing here.

The word for bless is `eulogeo` and it comes from `eu` (well, good) and `logos` (to reason). So it literally means to speak well of, and it is almost always translated as to bless, and a few times as to praise. The word for curse is 'kataraomai' and comes from 'kata' (down from) and 'ara' (a curse), so it means to speak a curse onto somebody.

The verbs are pretty clear, the Christians in Rome had to bless and not curse a group of people. Which group? The ones who were persecuting them. Whoa, hold on. Did we read that correct? What is the Greek word for persecuting? Its 'dioko' and it means to aggressively chase after something. It can be both positive (earnestly pursue) or negative (persecute, hunt down). The rest of the chapter makes it clear that Paul is not talking about people earnestly pursuing the Roman Christians, but people who indeed were evil and persecuted them (vs 17:  Repay no one evil for evil, vs 21overcome evil with good).

What did persecution look like in Rome at the time this letter was written? It is not very different from stories we hear about how the Islamic State is persecuting Christians today. Torture, imprisonment, fines, murder, and crucification. And Paul tells the Christians to bless the people who do these horrible things to them! This is incredible. It is similar to Jesus praying for forgiveness for the people who crucified Him. This is radical Christianity.

What is the application for us? We are not persecuted like the Christians in Rome in Paul's days, or as Christians in Islamic State today. But there are people who treat us badly at times. In traffic, on our commute, in shops, in sports, at work, or at home. How often do we pray for them, and bless them? Its a tall order, but one that God commands. If persecuted Christians can bless their persecutors, then we should be able to bless those who hurt us. Bless, and do not curse.