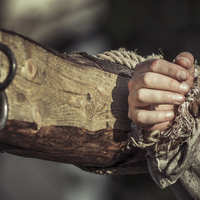 Matthew 16:24 Then Jesus said to His disciples, "If anyone desires to come after Me, let him deny himself, and take up his cross, and follow Me.

Jesus had just told His disciples that He had to go up to Jerusalem in order to suffer many things from the religious establishment, be killed, and be raised up on the third day. He knew He was going to die a painful death, His mission on earth was coming to an end, and now He tells His disciples what they (and by extension, us) need to do if they want to follow Him.

If we want to be disciples, we have to do these three things:

What do these three things mean?

The Greek word for deny is 'aparneomai', from 'apo' (away from) and 'arneomai' (deny, disown, repudiate, renounce). Kind of like the British renouncing their EU membership today. The apo gives extra force to the denying, so this is a pretty strong verb. What do we have to renounce, or strongly deny? Ourselves, 'heautou' means him- or herself. Self-denial is step one for anyone who wants to be a disciple.

It gets worse. The next thing that a disciple must do is to pick up their cross (daily). In Jesus' days, death by crucification was common. To take up your cross meant to be a willing participant in your own torturous death. It goes beyond denying yourself. It is denying yourself to such an extend that you are willing to die a painful death. It is more than stupid and dangerous, its the ultimate lunacy.

The last thing Jesus calls us to do is to follow Him. Aparently we cannot follow Him until we have taken steps one and two. What does it mean to follow Jesus? When He initially called the disciples, He said:

Followers of Jesus are fishers of men. They obey the great commission (to make disciples) and they do what Jesus did: convince people that living for God is far more economical than living for themselves (and teach that even if people decide to kill you for it).

Yes, denying yourself to the point of painful death is moronic, unless there are certain benefits to it that exceed the enormous costs. And indeed! Jesus does look at it from an economic perspective, because this is how Matthew 16 continues:

Matthew 16:25 For whoever desires to save his life will lose it, but whoever loses his life for My sake will find it. 26 For what profit is it to a man if he gains the whole world, and loses his own soul? Or what will a man give in exchange for his soul? 27 For the Son of Man will come in the glory of His Father with His angels, and then He will reward each according to his works.

You see, when we give up our lives, we know that we cannot keep them anyway! We all have a limited time on this earth and then we die. But Jesus teaches us that we can exchange our temporal lives for eternal rewards. Perhaps it is not so stupid and moronic after all. Perhaps its the smart thing to do.